CASE STUDY: FROM DARKNESS TO LIGHT 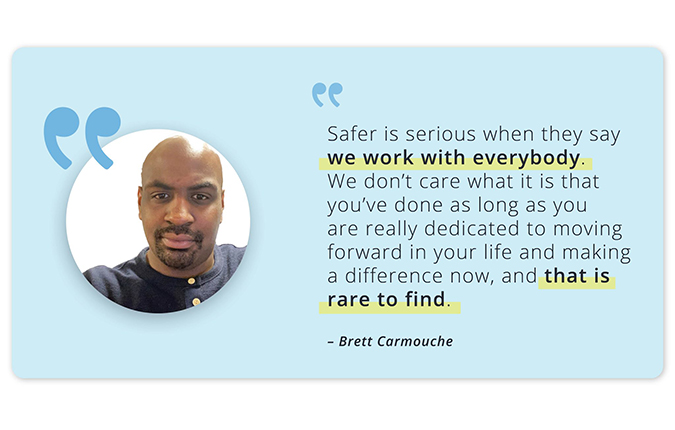 Every journey is different. Even the journey down the road to a better future. In celebration of Safer Foundation’s 50th anniversary, we’re sharing some of the incredible stories and successes our clients have achieved throughout our five decades of empowering formerly incarcerated individuals and reducing recidivism.

MEET BRETT C. Brett C. is currently the Director of Quality Assurance for the Safer Counseling and Wellness Center at Safer Foundation. Previously, he served us as Grant Compliance and Reporting Manager, and before that, Data Specialist for our ACE program. Brett first discovered Safer Foundation after his release from jail, thanks to a recommendation from his aunt.

As Director of Quality Assurance, Brett ensures that our programs are truly making an impact in a way that’s measurable and accountable. His vision and passion have made a huge difference in Safer Foundation’s efforts to empower justice-involved individuals to achieve their true potential.

HITTING A TERRIFYING BOTTOM Unfortunately, Brett was in a different place entirely when he first encountered Safer Foundation. In fact, Brett was at a low point in his life. He had spent six months in Cook County Jail, without having to serve a full prison term, but his life had taken a turn.

He had no job, and some of the friends he thought he could rely on were nowhere to be found upon his release. As Brett explains, “There were people that I thought I would be friends with my entire life, but the minute I went to jail, and it got put out into the media, I haven’t heard from those people since.”

The stress of trying to rebuild his life after jail was almost too much for Brett to bear. Getting the basics, from a driver’s license to a cellphone, is a common challenge upon release. But for Brett, getting a good job was the hardest of all.

Brett had a strong educational background with a bachelor’s degree, master’s degree, and another master’s degree in the works. But once released from jail, many of the doors that had been previously opened slammed shut. While his aunt did help him with some temporary employment, Brett’s options felt very limited.

He reached out to other reentry assistance providers in Chicago for help, but was turned down when the details of his conviction emerged.

In short, Brett didn’t know what to do. Emotionally, the stress was too much. With a seemingly dark future in front of him despite his young age, Brett found himself seriously contemplating taking his own life.

PICKING UP THE PIECES Fortunately, Brett’s aunt had an idea. She had heard of Safer Foundation and suggested he turn here for help.

Brett’s situation was unique in that he had a much higher level of education than most individuals helped by Safer Foundation. This made Brett more difficult to place in employment, but the support, counseling, and resources he received made all the difference. In fact, they saved his life.

“Safer was the bridge for me in terms of really being able to acknowledge and take into full account everything that I had gone through, take that for what it was worth, contextualize it appropriately, and then move forward. I was having a very difficult time, and it made me move forward,” Brett explained. “In fact, I was quite suicidal. I often say, and I said in my very first interview at Safer Foundation, that without Safer I probably would have killed myself. And I stand by that to this day.”

GETTING A DREAM JOB Brett was so inspired by Safer Foundation’s mission that he was determined to work for our organization. His new goal became finding which role within Safer was a good fit.

Brett reminisced: “It’s kind of a running joke now. I applied to so many different jobs [at Safer Foundation]. Essentially every job that they posted, I applied for it. If you asked anybody in HR, they’d say, ‘Oh, Brett? Yeah, he applied for, like, twenty roles here,’ including a Vice President role, which I knew I wasn’t gonna get. But I just thought, ‘I could do this, I could do that, I could do this, I could do that.’ I really was desperate to get into Safer to show them what I could do and also to really take full measure of where I’ve been, what I’ve gone through, and what I can do now.”

After two years of persistence, the perfect job opportunity opened up at Safer Foundation for Brett. And this was after Brett had been turned down from working for or with other reentry service providers.

He explained, “What makes Safer unique is that Safer is serious when they say we work with everybody. We don’t care what it is that you’ve done as long as you are really dedicated to moving forward in your life and making a difference now, and that is rare to find. We don’t cherry pick our clients, so many other organizations do.”

FAMILY, STABILITY, AND PURPOSE When he’s not working for Safer Foundation, Brett enjoys spending time with his husband of nine years and their lovable dog. He is enjoying the newfound stability and purpose he has gotten thanks to Safer Foundation.

“The reason I get up every morning and do what I do is not because I have to do it, or because I need to do it to make money. It’s because I want to do it,” Brett said. “I want to give back, I want to help others who have been in the places that I’ve been, and I want to see people truly progress and accomplish their goals and dreams. I don’t know that very many people get to say that. So I consider myself very lucky.”

Safer Foundation is proud to have helped people like Brett restart their life with a future of hope and opportunity.

If you’d like to donate to make the road to a better future a broader and smoother journey, with more service offerings and avenues of opportunity for people like Brett, simply visit our donation page.